The ever-so-changing meanings of a single world made a big impression upon artist Isis Rodriguez known to get inspired by ancient mythology themes and to fuse them with contemporary lifestyle at her latest exhibition titled —Blue Unicorn.

An artist like a word, is always evolving in time which is why not a painting or a memory can ever be the same; that’s the magic of it all and of the talent of Isis who has proven time and time again that even when some themes remain, you can always interpret them in different ways and provoque new reactions for the audience.

Extravaganza, oniric paintings and social life commentary are what we as an audience can look forward to this artistic gathering settled within the magical walls of Nepantla gallery. 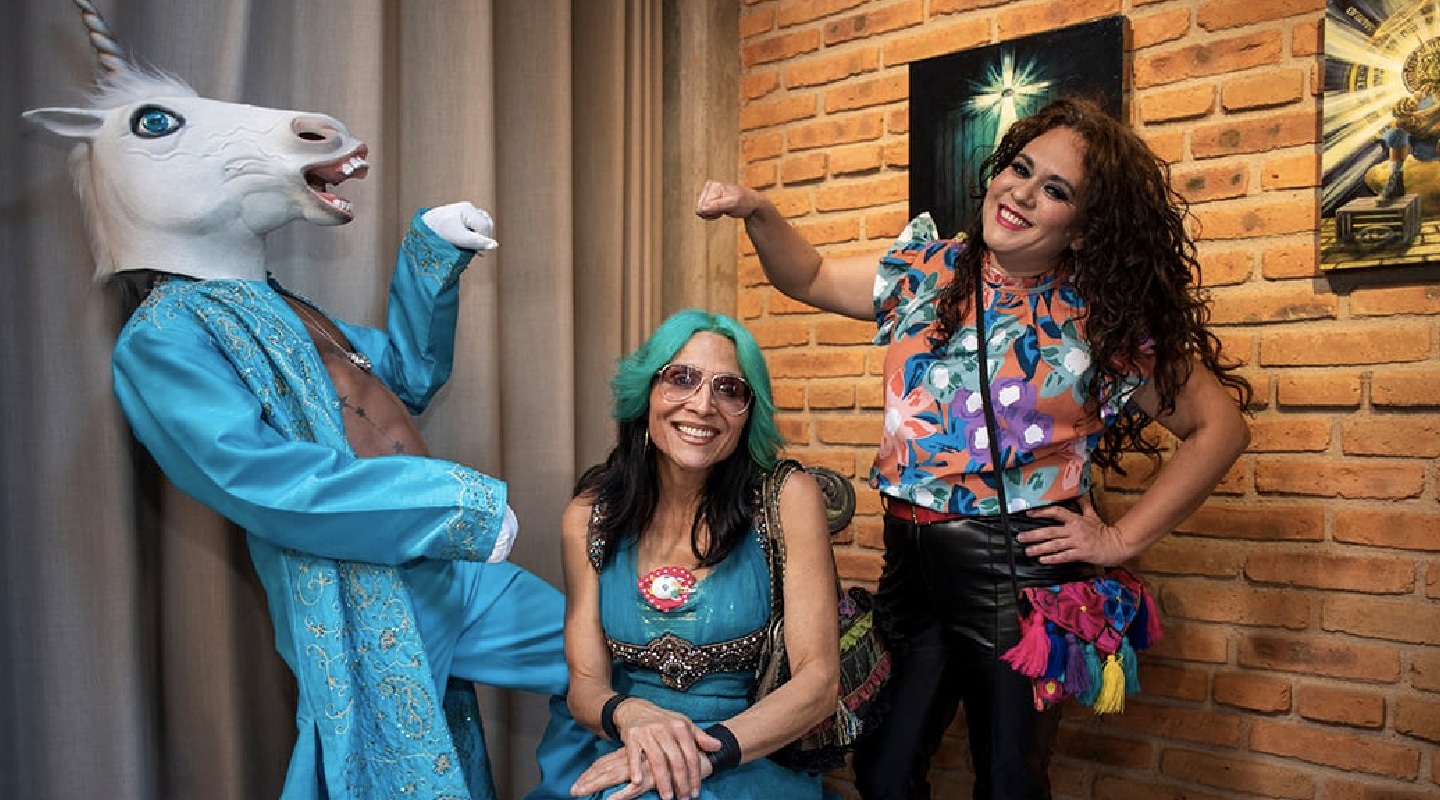 Feel free to come as a fairy and give yourself the chance to explore the own meaning that you will provide to the art you are about to encounter. Who knows, maybe your present one day, will be told as a myth in the future.

L: What does the name of your gallery Nepantla stand for?

I: Five hundred years ago countries were fighting on a regular basis for land and resources.  The Aztecs knew conflict very well, so well, that they invented a word called, Nepantla that literally meant “in the middle of it”.  Being in the middle means that you can observe humanity without taking sides, avoiding the conflict. I decided to name my conceptual gallery “nepantla” to do art that speaks from a place moving away from polarization.

The art that I do is modern mythology where I create archetypes that embattle current issues that we face today. Some examples of these issues are shame, blame, and love that I have used in my past mythologies. Because we are living in uncertain times, for this Blue Unicorn series, I chose the topic of global change and the unicorn became the perfect archetype for change.

L: Why did you decide to establish in San Miguel de Allende?

I: San Miguel is a world renown artist haven and retreat. It has the highest concentration of healers in Mexico. The healing culture here inspires me to paint modern mythology and mythology is alive in Mexico.  Mythology in the USA are superheroes and live outside of reality. But…long ago, mythology was created to teach people how to overcome conflict and become better human beings. Ancient mythology later transformed into organized religion like Catholicism, which was birthed from the Romans and Greeks gods and goddesses.  My embattled archetypes are symbols of resilience. 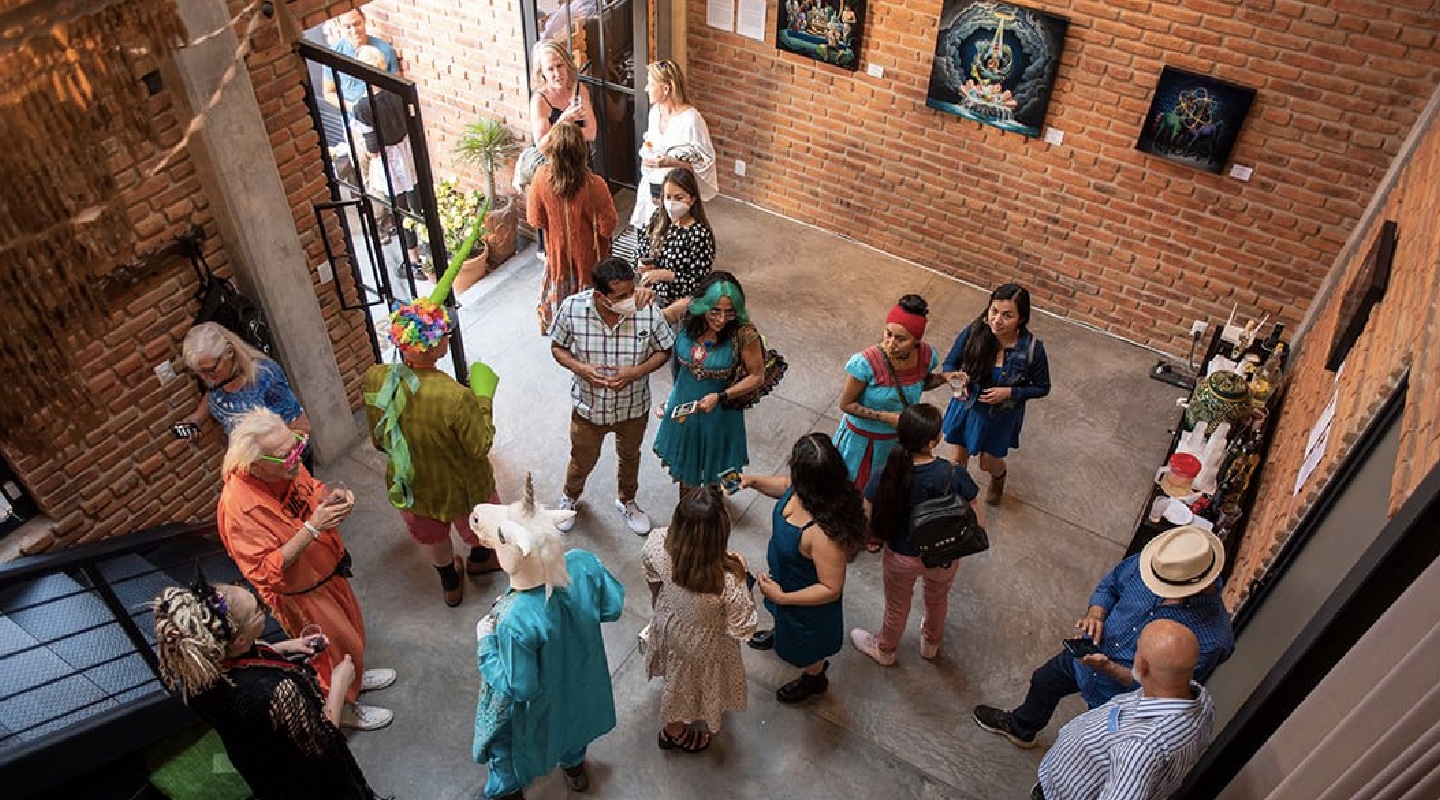 L: As a former exotic dancer and current performance artist, how do you play with movement? Can we expect to see a performance at Blue Unicorn?

I: Movement was irrelevant when I was an exotic dancer. I was basically vogueing to Playboy magazine and there’s no real art in that. However, there is a mythology that exists in the liberating, uncensored and free world of adult entertainment.

I got to experiment with different female archetypes and became different fantasy personas. I can change my identity to become a Catholic school girl or a nun, or a hippy chick wearing beads and a tie dyed bikini, or a classy school teacher with cat eye glasses and a ruler in my hand. You might say, that in order to understand contemporary mythology, I had to literally become the archetypes.

Presenting myself in a costumes that coincide with the themes of each of my series, helps communicate the topic that I chose for my audience.  I also invite my audience to participate and they do! They get to become the unicorn if they want. My art openings are known for attracting eccentrics. So expect to see the color blue at my unicorn art exhibit.

L: The word Unicorn has so many meanings, from the horse with the horn we all know to a third party in a couple, do you think art makes language evolve or is it the other way around?

I: That is a very intelligent question. I’m going to go with that art makes language. Language is vulnerable data that can be corrupted, modified, lost and deleted. It has been used as propaganda to manipulate people. But my art is not data and cannot be corrupted. It is made with the best oils and will last thousands of years. Five hundred years into the future, people will be able to understand what was happening now from looking at one of my painted archetypes.

L: So tell us, what’s the unicorn in the room?   but seriously, walk us through inside the mind of Isis while she is creating!

I: Lol…So how does a unicorn operate in her art studio? Well, the unicorn started to haunt me during the pandemic. That song by Silvio Rodriguez kept playing in my head and anyone that knows the reason he wrote that song, will know that the unicorn was coming from a deeply profound place and not the superficial one of cupcakes and glitter. When I decided that I was going to do an art exhibit all about unicorns, I did massive amounts of investigation into it’s history. I spent  hours and hours of listening to popular and alternative podcasters and influencers who were defining the unicorn, talking about unicorn and it’s values.  I kept a unicorn journal that has all my notes. I then sketch them out and use live models and screenshots to create my unicorn archetypes. I then use Photoshop to do very rough digital composites of the different types of unicorns placing them in unique environments. Then I print out the composite and begin the oil painting. It took me 2 years to complete 8 small unicorn paintings. And each one probably took me 1 to 3 months to complete because they are very detailed and take very sophisticated skill to do. It’s exhausting, but very rewarding…. 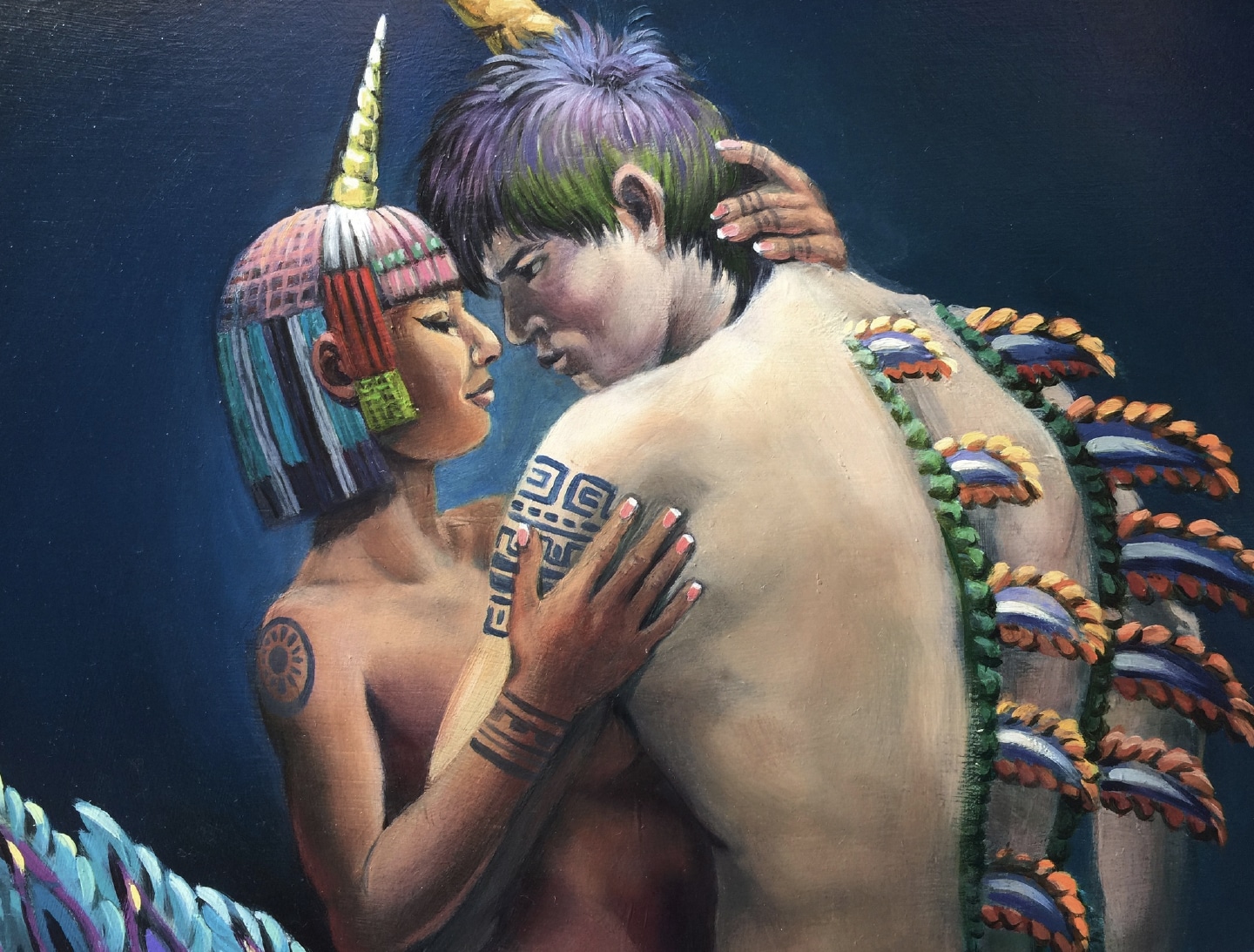 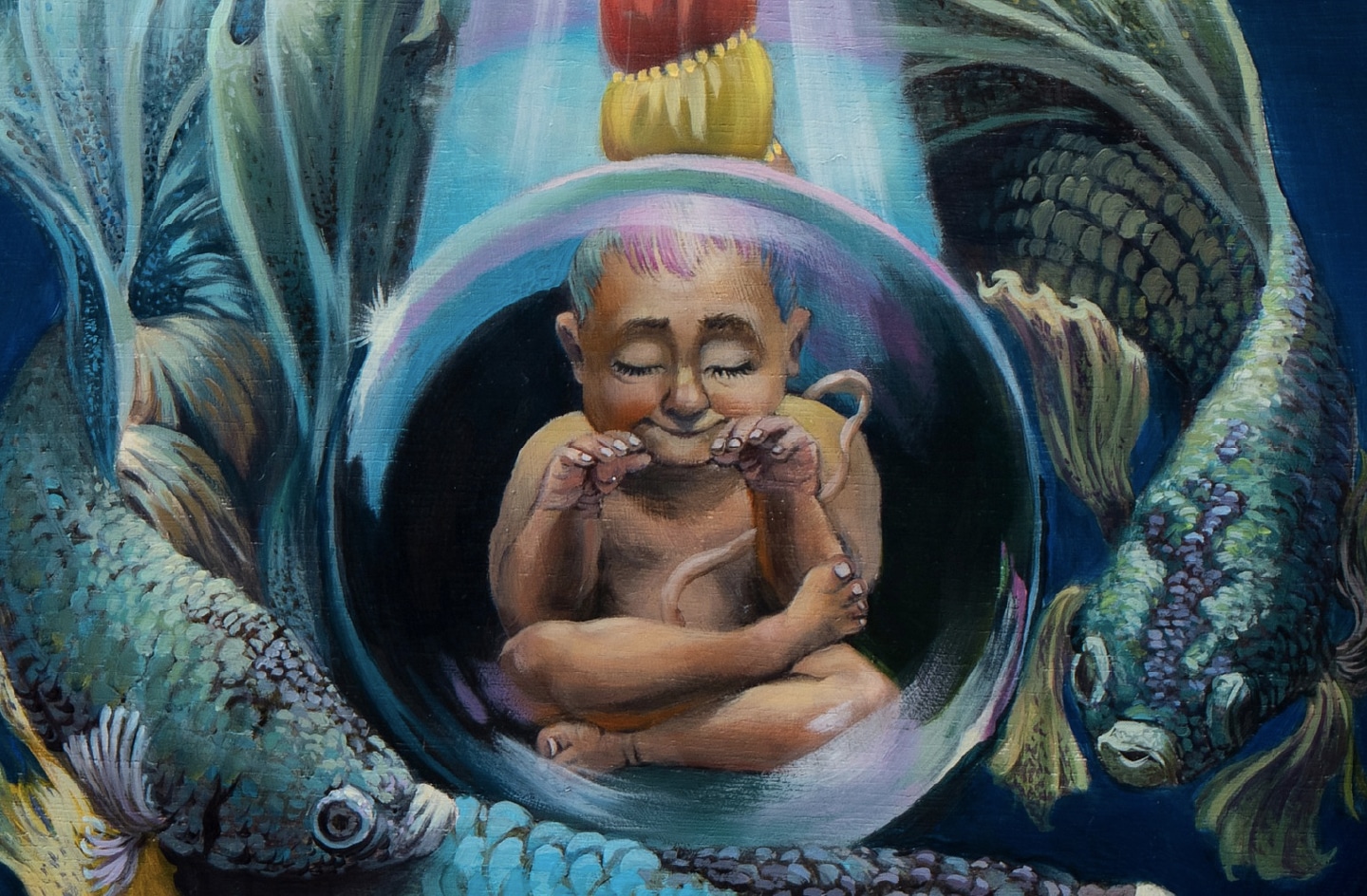 Take a ride with the blue unicorn from the time you read this till May the 7th at Galería Nepantla where you’ll be able to see lots of this friendly horses fusing Mexican culture with European and American influences.

Bring all the glitter you can get!!! 🦄 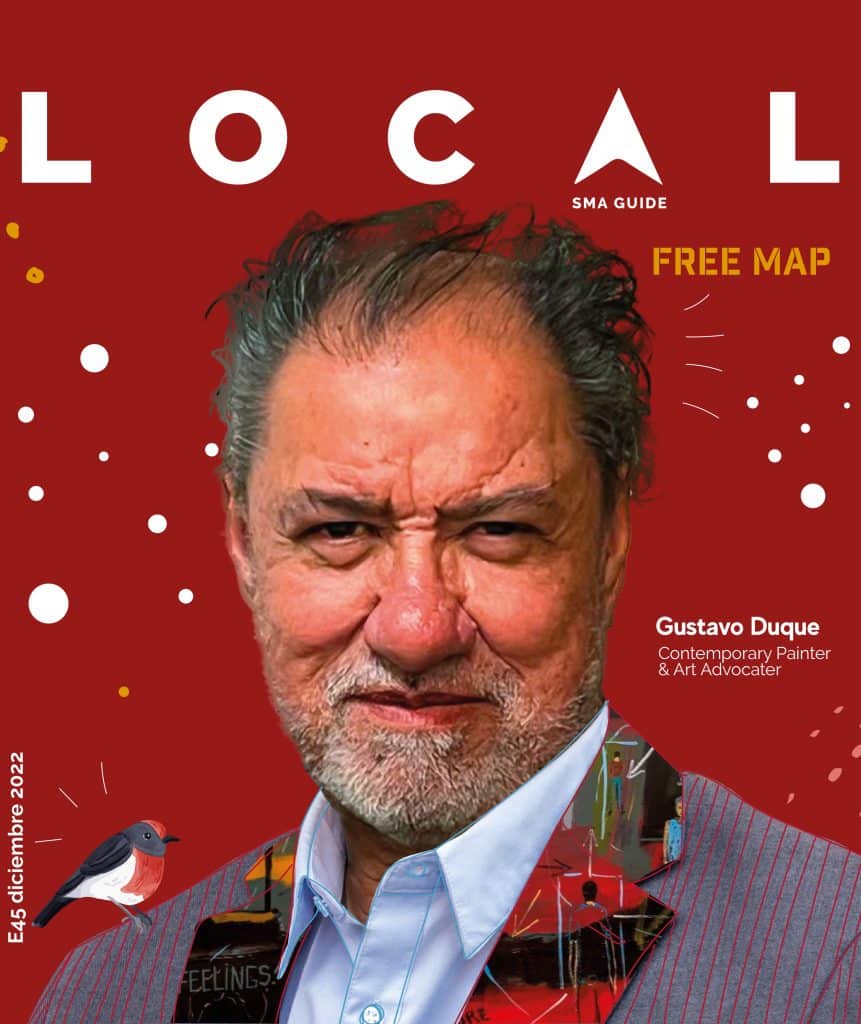